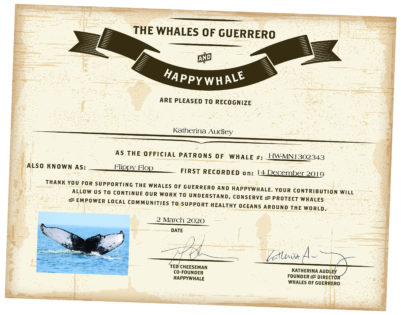 Adopt one of our whales!

Support our mission to study and protect whales and the ocean by adopting a humpback whale. We are a 501(c)(3) non-profit organization (EIN: 94-1162579) and your tax-deductible symbolic adoption keeps whales safe and the ocean healthy.

We offer two fun ways to symbolically adopt a whale

Lifelong naming rights and adoption program
The opportunity to name and adopt a whale is an incredibly special experience and we would love for you to have the honor of become a whale’s patron. When friends name whales in honor or memory of loved ones, and when individuals, families and school classes raise funds to name and adopt a whale they become connected with that animal for life! When you name a whale, that name becomes associated with the whale forever and your name is added to the whale’s ID records as your whale’s patron and human protector.

HappyWhale is a 31,000+ strong database of humpback whales and through them, you can identify which whale you’d like to name and adopt! You can choose one of our very own unnamed Whales of Guerrero whales here or find an unnamed whale that is special to you and we will work with you to give that whale a name, enter your name into HappyWhale’s database for all the world to see. 50% of adoption fees through HappyWhale support our project and the other 50% go to keep the team at HappyWhale hard at work tracking and reporting out on whales around the world. This massive database is a testament to the power of citizen science, collaboration and is making a significant contribution to our understanding of humpback whale movements and migrations not only in Guerrero but around the world!

For this incredible privilege, we ask for a minimum tax-deductible donation of $500 USD and suggest a $1000 USD donation; please contribute more if you can!

Whale naming patrons receive:
1. A printable adoption certificate with the whale’s and the patron’s names, a portfolio of beautiful whale pictures and a short biography of their whale
2. The patron and the whale’s name entered into the HappyWhale global database
3. Lifelong updates about whale resightings for their whale
4. The deep satisfaction of knowing that their tax-deductible gift made a deep and lasting impact to marine and whale conservation.

What to name your whale?
Our favorite names are memorable, unique and relate to something visible on the tail of the whale. Think creatively — what do the patterns and shapes you see in the whale’s tail inspire? Avoid common names like ‘Nick’ or ‘Scar’; this name will be with the whale forever and we’ll always send you updates whenever we learn anything about your whale!

When you adopt a whale through HappyWhale, you will receive automatic alerts when that whale is spotted again as it travels around the world.

1-2 Year Adoption Program
A 1- or 2-year symbolic whale adoption is a fun and meaningful gift that keeps whales and the ocean safe!

How it works:
1. Choose one of the 4 whales available for adoption below
2. Choose whether you prefer a 1 or 2-year adoption period and make your tax-deductible donation
3. Sit back and relax with a smile knowing that your adoption gift is helping whales and the world and your gift certificate (a digital PDF), whale fluke picture and whale bio is on the way!

Motitas
Motitas is a mama and a traveler. Her name means ‘polka dots’ (for the distinctive spots on her tail). We know that she gave birth and nursed a calf in 2015 the calm tropical waters near our shore in Guerrero and has also been spotted near Cabo San Lucas and in northern feeding grounds including Santa Barbara, Monterey Bay and the Farallon Islands. She was first spotted by researchers in 1992 near the Farallon Islands offshore from San Francisco, California. Motitas was adopted by Gabriela Quintero, of the band Rodrigo y Gabriela and the Casita Ecovegana in Zihuatanejo and even has a song written for her.
Adopt Motitas Now

Flint
Flint is a song carrier who crosses the Pacific to share the unique song of the season with his whale community in Hawaii. While most male whales stick to one breeding range (Mexico or Hawaii, for example), Flint is one of a very few whales who crosses the Pacific during breeding season, probably partly to share and teach the unique song of each season with his whale community over seas. Flint also travels to feeding grounds much farther north than most of the humpback whales we see in Guerrero; he was spotted in British Columbia in 2004 and is often seen during summers off the coast of northern Washington. Flint is a mysterious whale with a fascinating history who always keeps us guessing.
Adopt Flint Now

Odisea (aka Diosa)
This gorgeous whale with an almost all white tail is named Odisea (Odyssey) for his/her far ranging travel tendencies. Researchers have spotted Odisea as far south as El Salvador, and also in Oaxaca, Guerrero, Banderas Bay and feeding in Monterey Bay, California. These southern traveling tendencies make Odisea a likely member of a tiny endangered group of Central America humpback whales who Whales of Guerrero helps to protect through our research, education and conservation work. Odisea’s tail is so beautiful and distinctive that we all know it by sight and celebrate his/her arrival every time we see him/her. We don’t know if Odisea is a male or female, just that he/she has been seen with other adult whales in the breeding grounds. Hopefully more resightings will reveal Odisea’s secrets to us over time.
Adopt Odisea Now 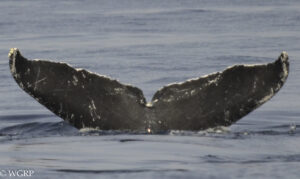 WoG_HB_322 (Unnamed whale )
This big male whale has been spotted in Northern and Southern California feeding grounds going back to 2004 and in Banderas Bay and Guerrero in 2007 and 2018.  It pops up in Monterey Bay, Santa Barbara and near Los Angeles to feed in the summer time and has been seen with another adult whale in Mexico. Researchers in California were able to determine that it is a male by genetic sampling. It collects new scars on its tail and body during its migrations and battles for the right to mate and we are always happy to see it! Someday someone will become its patron and give it a name. Until then, we salute you, beautiful HB_322 and we hope to see you down in Mexico again this winter!
Adopt WoG_HB_322 Now